After sampling this beer last week I thought it tasted so good that I brewed this exact same recipe again this past weekend. I was trying to decide what to brew and kept coming back to this Screwy Pale Ale because I think it's going to be a winner. So I emailed my order over to Joe early Sunday morning, drove out to pick it up and was brewing beer by lunchtime.

I pitched White Labs WLP005 - British Ale Yeast™ directly into the 70F wort right after aerating it. I soaked the tubes in One-Step as an extra precaution against infection.

1.75 pounds Crystal 60L
0.25 pounds Biscuit Malt (Belgium)
1 ounce Yakima Magnum (pellets)
2 ounces Kent Golding (UK) (pellets)
1 ounce Cascade (pellets)
1 - White Labs WLP005 - British Ale Yeast™
Aerate, pitch at 70° F and ferment at 68° F until final gravity is reached
Raise to 70° F over 2 days and rack to secondary fermenter
Cold condition secondary fermenter for 1 week at 34° F
Keg at 30 psi for 2-3 days and serve at 34° F
Infusion Mash at 156° F for 60 minutes.
Boil for 60-90 minutes.
Ferment at 68° F (18.8 °C).
The only real change I made in the ingredients was with my yeast selection, this time I was able to use some really fresh White Labs WLP005 - British Ale Yeast™ as opposed to the Safale S-04 Dry Ale Yeast I used last week. After soaking the new WLP005 tube in 70F One-Step I used an empty tube from an earlier brew to measure the yeast out into 2 tubes, one for each of my 2 fermenters.

Since I use the Mr. Beer fermenters and they hold around 2.5 gallons of wort I can use half of the yeast that's packaged for 5 gallon brews and still get a high cell count. I see this as another low risk way to save money on ingredients while maintaining quality.

Directions:
Infusion Mash: (Soak tun in 8 quarts of 170° F water for 20 minutes and dump it to preheat tun)

Heat 20 quarts of filtered water to 172° F
Pour 14 quarts of 172° F water into mash tun
Mix in 11.0 pounds of crushed grain mix at 70° F
Pour the remaining 172° F water to fill mash tun to 4.50 gallon mark
Stir water and grain mixture and adjust to 156°F and mash for 60 minutes
Fly sparge with 168° F strike water to set mash bed to 168° F
Lauter for 30 minutes adding 11.5 quarts of sweet wort to both 12 quart boil pots
Full Wort Boil: (Split these quantities between both boil pots)
Add 1 ounce Magnum hops with 60 minutes remaining to boil
Add 2 ounces Kent Goldings (U.K.) hops with 20 minutes minutes remaining to boil
Add 1/2 tablet WhirlFloc with 9 minutes remaining to boil
Add 1 ounce Cascade hops with 7 minutes remaining to boil
Use wort chiller to cool wort to 70° F
Primary Fermentation:
Use auto-siphon to rack wort from boil pots to fermenters
Fill the Mr. Beer fermenter with wort to just above the 8.5 quart mark
Aerate wort and pitch 1 tube White Labs WLP005 - British Ale Yeast™ at 68-70° F
Ferment to final gravity then raise to 70° F over next 2 days
Secondary Fermentation:
Cold condition secondary fermenter for 1 week at 34°F
Keg/Bottle:
Keg and force carbonate at 30 psi for 2-3 days at 34°F
Bottle prime and carbonate at 70° for 7-14 days
After lautering off a little over 5 gallons of wort I took a gravity reading of almost 1.020 proving to myself that they were still plenty of sugars available to be drawn off from my 11 pounds of grain. I got into the habit of taking gravity readings at 3 critical points during my brewing sessions, when I first begin to lauter, when I have finished lautering and after the boil just before pitching my yeast.


The initial sample I took showed 1.090 and tasted really sweet, no tannins there. I had 1 bad experience where my all grain batch turned out very astringent and I attribute that to sparging with too hot strike water and too much volume.

I recently installed an exhaust fan to remove the wort boil vapors from the basement where I do my brewing. At the opposite end of the basement I leave the window open to draw in fresh air from outside. I recommend that anyone who considers brewing beer indoors includes adequate ventilation in their plans. Removing the odors and hot vapors created during a typical brewing session will go a long way in keeping living area  healthy.

Since I brew indoors on my stovetop I split the 5 gallons of wort collected into two 12 quart pots so I can get them both up to full boil quickly.The trick to getting roughly same same OG in both pots during the lauter is to alternate between the 2 pots when filling them.

I fly sparge and take at least 30 minutes to fill both boil pots with sweet wort. The new bracket I made to hold my sparge diffuser really worked out well for me. I was able to pour 168F strike water into the top of the mash tun without having to hold and balance the diffuser with one hand.

After filling both boil pots with about 11.5 quarts of sweet wort I took another hydrometer reading to see how much sugar was still left in the 11 pounds of grains. This sample still tasted sweet, no tannins or astringent tastes were present, the reading was 1.020 which is above my 1.010 minimum threshold for lautering. 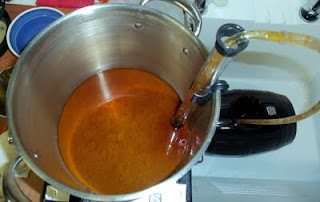 Transferring the cooled wort to the fermenters has become so easy I almost can't wait to use my auto-siphon when I brew, it works that well. The wort I rack to the fermenter is cleaner too, much of the trub is left behind in the boil pot so the wort that does make it into the fermenters is cleaner. During the boils I've also been ladling off a lot of the hotbreak and foam that accumulates on the top of the boiling wort.

My original gravity readings confirmed I came very close to hitting my target OG of 1.062 proving that my mash conversion efficiency was what I had expected. I pitched a 1/2 a tube of WLP-005 into each of the 2 sanitized Mr. Beer fermenters at 70F after aerating the wort into a foam.


About 24 hours later both fermenters showed very active fermentation and a nice trub layer on the bottom, a sure sign that there would be more great tasting beer to come. While I keep an eye on these two latest batches of SPA this week I'll be also be bottling up the two previous batches I brewed on May 28th.

The final gravity reading taken just before bottling came very close to my 1.015 target and after 2 days of getting the same 1.017 hydrometer reading it was time to bottle.

Since I was able to make a connection where I can buy Sierra Nevada Pale Ale bottles that ship with free beer inside, I haven't been buying too many empty longnecks. I like the Sierra Nevada bottles because they are shorter and stubbier than the standard 12 ounce longnecks and are easy to tell apart.

After soaking the bottles in a mixture of OxiClean FREE and water for at least an hour I peel off the paper labels and scrap the remaining glue off with the edge of a plastic ruler. I let the bottles dry on the outside before putting my vinyl labels on them permanently.


I used my priming calculator to determine how much pure cane sugar would be needed to carbonate 2.25 gallons of beer, the answer was 5 tablespoons. I filled a small pot with about a cup of filtered water and brought it to a boil. Then I stirred in the 5 tablespoons of pure cane sugar and let it boil for about 5 minutes.


I cooled the sugar 'syrup' and poured it into a sanitized keg that I used as my bottling bucket. Then I transferred the fermented beer from the primary fermenter to the bottling bucket, right on top of the sugar syrup so it mixed in well.


I used a bottling wand and locking spigot to bottom fill each bottle and placed a sanitized bottle cap on each until I was ready to cap them all. The long arm and stable base of the capper made it very easy to cap a case of bottles once they were filled.

The samples we tasted were really perfect having a nice hoppy character, somewhat sweet and that coveted biscuity finish. There was nothing harsh about this beer at all in fact the flavor, smell and aromas came together to make this a truly memorable beer. This will make for some good beer drinking come July 4th when the carbonation should be completed.


Another winner in my book! This beer had a beautiful 14 SRM color that fell within the very upper limits of an English IPA beer style. There was a nice carbonation level that produced a creamy head of foam that lasted through the entire beer. The hops were prominent but not too overpowering, the IBU were about 5 points higher than the classic IPA style, and there was a nice biscuit finish. All in all this recipe gets my 2 beers up award and has earned a place in my standard recipe library as one to brew again.

Posted by Vince Feminella at 6:20 PM