For the past month or so I haven't been able to find time to do any brewing, between the sweltering east coast heat, travel, vacations and other commitments it was nearly impossible to even consider it. But I'm happy to report that all changed yesterday. With the three day Labor Day weekend coming up I was finally able to set aside time to work in the brewhaus and brew up two of my favorite Mr. Beer recipes, with a few new twists.

About 3 weeks ago I had ordered double recipes of both Ptarmigan Ale and Proud Papa Pilsner from the Mr. Beer website. I decided to try these recipes once again because it had been nearly a year since I'd actually brewed either of them last. This time I would include in the recipes steeping some Crystal 20L to give the finished beer a little more body and head retention. Since switching to all grain brewing I really learned to enjoy a full bodied beer with all the great lacing and head retention they produced. I knew the Ptarmigan Pale Ale and Proud Papa Pilsner extract recipes would definitely benefit by steeping some grains in them.

My plan to reduce brewing time was to use 3 pots, one to hold the steeping grains and 2 more to hold the boiling wort. The larger 20 quart pot is where I steeped the Crystal 20L grains for 30 minutes or so in 154F filtered water. The two smaller 16 quart pots were filled about 2/3 with filtered water and put to the heat to start them boiling during the steep.

Once the steeping was complete I removed the grain bag letting it drain for a minute or two without squeezing it, to remove as much liquid as possible. I then poured the steeped wort evenly distributed between both 16 quart boil pots and brought them up to a rolling boil for about 60 minutes or so.

While waiting for the wort to boil I boiled a few cups of filtered water and cooled it down to 100F or so before pouring it into 4 small mason jars I had soaked in One-Step. I then emptied the 4 packets of Safale US-05 yeast, one packet each, into the jars and gave them each a gentle stir using a sanitized plastic fork. I had by now already tossed 4 packets of Mr. Beer fromunda yeast into both boil pots to act as nutrients for the Safale US-05. I figured this along with rehydrating the dry yeast before pitching it and by pitching an entire packet of yeast, double the amount needed for a Mr. Beer sized batch, I would have a strong fermentation with as little lag time as possible.

As I got my racking cane, wort chiller and fermentors sanitized and ready for use I would from time to time give the yeast in each of the mason jars a few gentle stirs. When you first pour the dry yeast into the water it will tend to clump up pretty bad. But as the water starts soaking through the yeast's cell walls the clumps are eliminated and the mixture now takes on a creamy texture. Since the dry yeast is packaged with a bit of food for the cells you can expect to see a small amount of krausen develop in each of the jars too.

The small mason jars are easy to work with, they pour nicely into the fermentor and they don't tend to slip out of your wet hands. They're easy to fit in a small pot when sanitizing and the gaskets under the lids work well to keep out and dust and bugs. I've already added them to my brewing process so no more fumbling around using small cereal bowls and plastic wrap to rehydrate the yeast in.

I rehydrated and then pitched Safale US-05 Dry ale yeast directly into the 70F wort right after aerating it really well. I soaked the mason jars in One-Step™ as a precaution against infection.

Directions:
Steep: 1 pound of Crystal 20L in 8 quarts of filtered water at 154° F water for 30 minutes
Pour the wort into a 16 quart boil pot
Top off the boil pot with boiling filtered water
Full Wort Boil:
Boil for 60 minutes total
Add 1 ounce of Amarillo hops with 7 minutes remaining to boil
Add boiling water to boil pot as needed to keep it topped off

After a 60 minute boil remove the heat source and stir in Mr. Beer extracts
Use wort chiller to cool wort to 70° F before pitching yeast

Primary Fermentation:
Use auto siphon to prevent excess hop and grain debris from getting into fermentor
Fill the Mr. Beer fermentor with wort to the 'Q' above the 8.5 quart mark
Aerate wort thoroughly by whisking it for a couple of minutes
Pitch 11g of rehydrated Safale US-05 Ale yeast at 70° F
Aerate the wort again for several minutes to get as much oxygen into as possible
Ferment to final gravity at 68° F, raise to 74° F over 2 days

Secondary Fermentation:
Rack to sanitized secondary at 70° F
Dry hop with 1.5 ounces of Cascade hops for 5 to 7 days
Cold crash for a week before bottling or kegging.

The entire 'hotside' brewing process completed as planned and there was plenty of wort in the boil pot to almost completely fill both Mr. Beer fermentors. After using my wort cooler and the wort now at 70° F it was time to rack it off into the little brown kegs. Previously, while the wort was boiling away, I had sanitized all the fermentors and racking gear that I would be using during the brewday.

It didn't take very long to do because I always clean out the fermentors and give them a soak in OxyClean FREE right after every use. This way when I go to use them the next time all that's needed is to take apart the spigot assemblies and lids and soak them in One-Step™, then screw in the spigots and fill the fermentors half way with One-Step™ and let them soak for 10-20 minutes before use.

The racking cane makes transferring the wort from the boil pot to both Mr. Beer fermentors really easy to do. It also prevents spilling any wort during the process helps keep cleanup to a minimum. If you're still lifting the boil pot and pouring wort from it into the tops of the LBKs then you should seriously consider buying a racking cane. They're inexpensive, easy to maintain and fun to use.

The hydrometer reading I took just before I placed the fermentors in the fermentation chamber read 1.048 which was about 8 points lower than the qBrew calculations. This was expected since the Mr. Beer extract numbers have been found to be a bit overstated to start with. If each can of HME/UME was off by only a single point the OG reading of the finished wort would be off by 6 points or a point per can.


I had put a half dozen or so frozen water bottles in the fermentation chamber to bring the inside temperature down lower before placing the now filled and pitched fermentors in it. I know that the temperature of the fermenting beer will go up during the first day or so and this is why I keep them cooled off a bit during that time. I planned to ferment this batch at 68-70° F until they reach final gravity, so I'll only need to replace the frozen water bottles for the first day or two in order to hold the temperature between 66-68° F. This temperature in my basement brewing area is a constant 68-70° F this time of year so it'll be perfect for fermenting this entire batch.

I'm fortunate enough to have built Screwy's Fermentation Chamber last year when I decided to brew up my series of Spinning Monk Lager beers. Since then I've also used it for maintaining fermentation temperatures of my Ales as well as Lagers. It's very well insulated so just a few frozen water bottles are needed to keep the temperature lower as needed. I tape the probe of my digital thermometer directly to the outside of the Mr. Beer keg so the readout shows the temperature of the beer.

I always look forward to taking that first peek inside the fermentation chamber to see how well the fermentations have taken off. I like to wait at least 12 hours before taking my fist peek. I was pleased to see that all four fermenters showed signs of very active fermentation, which is exactly what I had hoped to see. Pitching fresh, viable yeast at the proper temperatures is the key to getting your fermentations off to a great start. The sooner the population of good yeast cells multiplies themselves to the point of being the dominant microorganism in town that better the beer will turn out.

Well it's now all over except for the wait. By the end of this week I'll take my first final gravity readings and toss a sanitized muslin sack filled with hops into each fermentor and let them soak for another 5 to days. Then I'll take more final gravity reading to see when this batch is ready for bottling and kegging. I will be using pure cane sugar to naturally carbonate both the 12 ounce bottles and the 2.5 gallon corny kegs again this time. That's my plan and I'm sticking to it.

The Proud Papa Pilsner recipe followed basically the same exact brewing steps as did the Ptarmigan Pale Ale recipe except of course it used different hops and extracts that the Mr. Beer recipe called for.

It's Sunday and time to take my final gravity readings and toss in my dry hops. The plan is to let the hops soak at the bottom of the fermentors for the next 5 days. I want to bottle and keg all 4 LBKs this coming weekend. I split 3 ounces of Cascade pellet hops between the 4 batches so there should be plenty of hop aroma when they're ready to drink.

I found that a single nut and lock washer were all that was needed to send the hops sacks to the bottom of the fermentors. Having the entire hop sack submerged under the beer will assure the beer has maximum contact with the hops adding maximum aroma in the process.

The fermentors are safely tucked away in my fermentation chamber and kept at 71-72F for the next 5 days until I'm ready to bottle them. I don't think I am going to bother cold crashing these four batches because I'm getting anxious to get them into my pipeline as soon as possible.

The Cascade hops had a good 5-6 day soak in the primary fermentors and next I transferred the beer to my bottling bucket. I boiled some filtered water and stirred in 5 tablespoons of pure cane sugar to make up the priming solution.

I was able to fill both 2.5 gallon corny kegs with my Ptarmigedon ale and drinking on tap in about 3 weeks. It has a nice hoppy character that's citrusy but not overpowering. This one tastes so much better than the Proud Papa Pilsner recipe I brewed on the same day. 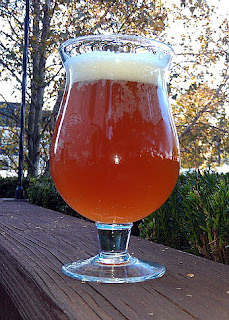 When I first started brewing using Mr. Beer extract only recipes I actually liked the Ptarmigan Pale Ale recipe enough to brew it a number of times. By adding steeping grains to the original recipe the head and lacing were a lot better and the addition of the Cascade finishing hops blended in nicely with whatever they put in the HME too. The Fermentis Safale US-05™ yeast produced a nice clean tasting ale, one that I will be brewing again.

Posted by Vince Feminella at 7:19 AM