Bottle Day - 6 Batches In Under 7 Hours

This weekend I was able to bottle up 6 separate Mr. Beer recipes in just under 7 hours, including kitchen cleanup! This makes 27 two gallon batches bottled to date, starting in February 2010. I picked all lighter colored pale ales and a wheat beer recipe to brew last month since it's been so hot here on the east coast. This time I also used my new carbonation calculator to determine the correct amounts of priming sugar to use in each different style of beer. I no longer followed the default priming sugar amount recommended by Mr. Beer's instructions.
I bottled up 2 gallons each of the following recipes:
Father's Day Cream Ale, Classic American Blonde Ale w/Pale Export, West Coast Pale Ale w/Pale Export, High Country Canadian Draft w/Pale Export, Cowboy Golden Lager w/Pale Export and last but not least one of my favorites Whispering Wheat Weizenbier w/Golden Wheat.

Office desktop space doubles as a 6 keg fermenting station
I bottle my beer in 1 litre PET bottles that I first sanitized using One-Step™ sanitizing cleanser that came with my Mr. Beer premium home brewing kit and stirred in a packet of sanitizer into a pot holding 2 gallons of warm water. Then using a small funnel and a plastic cup I filled each of the 54 PET bottles about halfway with the sanitizing solution, give them all a few really good shakes and lat them soak lying down for at least 10 minutes.
While the bottles were soaking I poured a small sample of beer for tasting and visual inspection. Ideally after fermenting for 21 days at a constant 70F the beer at this point will taste like flat beer and not too sweet. This is a sign that most of the sugars in the green beer have been turned into alcohol and CO2 already and the beer is ready to bottle. 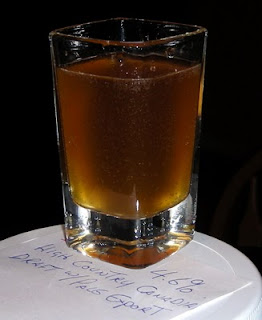 High Country Canadian Draft with Pale Export sample taken just prior to bottling.
The sample above shows the clarity of the beer and proof of the residual CO2 present in the beer as indicated by the small bubbles on the sides of the sample glass. I targeted the finished beer's CO2 volume to be 2.5 volumes modeled after the CO2 volumes of an 'American Style Pale Ale' which is between 2.26 to 2.78 volumes.

At 70 F the residual CO2 volume of the fermented beer calculated out to .83 volumes.To increase the volume to target of 2.5 volumes of CO2 I added 1.5 additional teaspoons of pure cane sugar to each 1 litre PET bottle as shown by the calculator below.

Bottle Priming Calculator
After pouring 1.5 teaspoons of cane sugar into each bottle and filling them with fermented beer, I turn each bottle 'end over end' several times to mix the sugar and beer together. This is done to make sure the sugar is evenly distributed throughout the beer before screwing on the bottle caps and beginning the carbonation process.

Pet bottle after mixing the priming sugar into the fermented beer.
Over the next 21 days the yeast will convert the priming sugar to CO2 and alcohol to produce just the right amount of carbonation for the style of beer bottled. I carbonate my beer at a constant 70F and usually give them a squeeze once a day to see how the carbonation is progressing. Not much happens carbonation wise for the first 1 to 3 days but the bottles will become slightly harder to squeeze each day.

Posted by Vince Feminella at 3:09 PM