IBU stands for International Bitterness Unit where one IBU equals one milligram of isomerized alpha acid in one liter of finished beer. The higher the IBU number, the more bitterness in a given style of beer. Keep in mind however that this can be slightly deceiving because a malty beer rated at 50 IBU's will taste less bitter than a 'balanced' beer rated at 50 IBU's.

A beer with a heavy malt character like Sticky Wicket Oatmeal Stout, will balance out the bitterness so it will seem less bitter than a more balanced beer like Classic American Blonde Ale,even though they both have about the same bitterness levels.

Another factor to be considered is that recipes resulting in a higher OG or Original Gravity will require a higher IBU measurement to maintain 'balance', not too sweet and not too bitter.

Hops play 3 important roles in the making of your beer. They are used for adding 'aroma', 'flavor' and 'bitterness'  to your beer recipes depending on when and for how long they are added during the boil. A good rule of thumb can be summed up as 'the more hops that go in early in the boil, the more bitter your beer will be. The more hops that go in towards the end of the boil the hoppier your beer will seem in aroma and flavor though not necessarily in bitterness'

Aroma: For peak aroma add your hops to the boiling water no more than 7 minutes prior to  turning off the heat source.

Flavor: For peak flavor add your hops to the boiling water no more than 20 minutes prior to turning off the heat source.

Bitterness: For peak bitterness add your hops to the boiling water no more than 60 minutes prior to turning off the heat source

Mr. Beer Hopped Malt Extracts (HME) contain hop additions that can be calculated to determine their IBU number, using a boil time of 5 minutes, an original gravity of 1.036 per can. Each of the 16 different HMEs have their own alpha acid percentages which are used to determine each extract's bitterness values.


The IBU Bitterness Calculator can be accessed by Clicking Here. 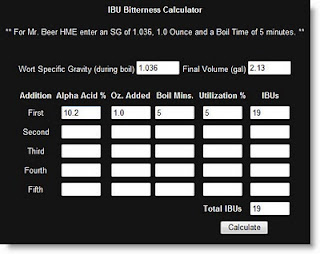 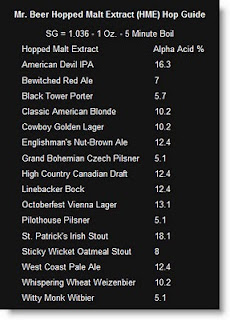 Once you have entered the information for your Mr. Beer extracts using the guide above, you can continue adding hop additions to the be calculated.
Example: Amarillo Hops have an alpha acid of 8.6% and are used primarily for aroma and/or flavoring. To add some Amarillo for flavoring input 8.6 alpha acid, 1.0 ounce and 18 minutes boil time to the second row of the calculator. Click calculate to process the total IBU number of the combined Amarillo hops and the HME hops.
Posted by Vince Feminella at 1:19 PM