For this recipe I decided to include crystal malt steeping grains into the brewing process. It would be the first time I've used grains in any of my beer recipes and I was sure it would produce some really good results so I was anxious to try it. I was happy to see that this step only increased my brewing time by less than an hour, compared to the all extract recipes I'd been used to. What surprised me the most was how the steeping grains filled my house with such really awesome aromas that reminded me of warm freshly baked breads.

I used qBrew's default 'American Pale Ale' style guidelines to crunch the recipe's numbers.
Click to download Screwy's latest qBrew database
Estimated  IBU=46, SRM=8, OG=1.059. FG=1.015, ABV=5.7%
1/4 pound Crystal 10L mixed with
1/4 pound Crystal 40L steeped at 155F for 30 minutes
3.3 pounds Muntons Hopped Lightly extract
1 ounce Cascade pellet hops boiled for 10 minutes
11 grams Nottingham dry yeast
1 ounce Cascade pellet hops added to fermenter
As with the standard Mr. Beer instructions I started out by sanitizing my utensils and then filling a 3 quart pot with 4 cups of water, but instead of bringing it to a boil I brought the temperature up to about 160F and dropped my grain bag into the pot. Once the bag was in the pot I maintained the temperature by turning the flame on and off and I let the bag steep for 30 minutes. 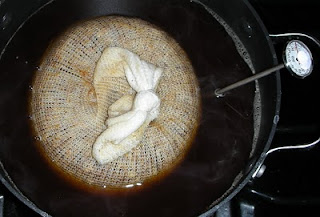 After steeping the Crystal mix in the 155F water for 30 minutes I removed the grain bag from the pot being careful not to squeeze it while removing it. 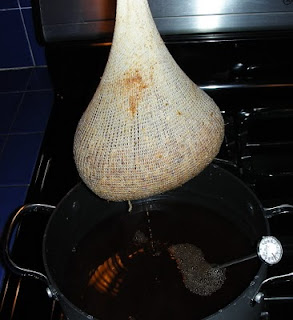 Remove the grain bag after 30 minutes and discard it

I then transferred the wort to larger pot for the boil adding in 1 ounce of Cascade pellet hops used for flavoring and 3.3 pounds of Muntons Hopped Lightly extract and stirring them well. I turned on the flame and brought the wort up to a rolling boil for 10 minutes. 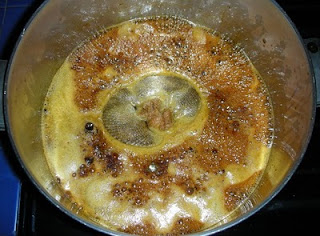 I filled a sanitized 2.13 gallon Mr. Beer fermenter with 6 quarts of filtered water that was around 72-76F getting it ready ahead of time while the wort was still boiling. 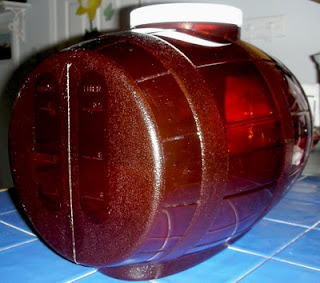 Once the boil was completed I let the pot sit on the stove while I filled the sink with ice cubes and cold water. I then placed the pot of wort into the ice batch until the temperature dropped down to 70F, the recommended temperature for pitching my yeast.

While the wort was cooling down in the sink I prepared my yeast by pouring 4 ounces of 90F water into a sanitized bowl and then adding 11 grams on Nottingham yeast to it. 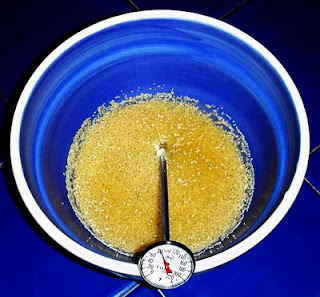 Nottingham yeast after a 15 minute soak
To get the yeast temperature down to 70F I added about 4 ounces of wort to the mix every 5 minutes and stirred it gently, repeating this until the yeast mix was the same 70F as the wort. 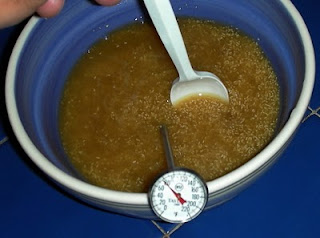 Add wort and stir until mix is at 70F 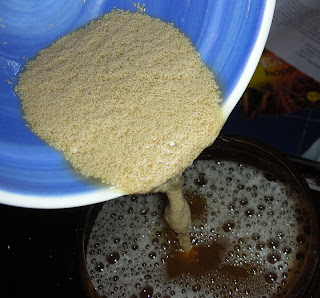 Pour yeast mix into well aerated 70F wort
The fermenter is now sitting in an air conditioned room at 60F with one end of a wet tee shirt  wrapped around it and the other end sitting in an inch of water to help keep it cool. I'll be monitoring the fermentation over the next few weeks while imagining what this finished brew will taste like. 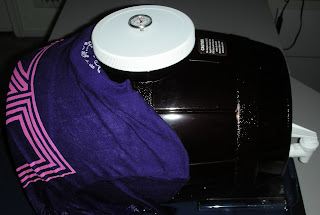 The Danstar Nottingham yeast took about 48 hours at 60F before it created any noticeable amounts of krausen at the top of the fermenter.  The Mr. Beer dry yeast at 70F has sometimes produced krausen within 24 hours in some of the prior brews I've done. By day 5 the 'Notty' had produced a very noticeable layer of krausen that is still visible on day 15. 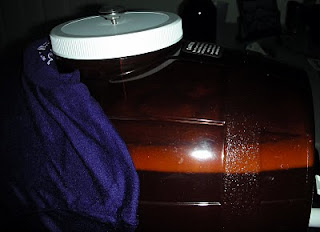 Nottingham Krausen Layer On Day 5
Posted by Vince Feminella at 8:26 AM