It's been 6 days since I bottled the 8 1 litre PET bottles with the Weissbier recipe I brewed last month. The bottles have been sitting in my basement at 65-70F and they are getting pretty hard to squeeze already. Holding them up to the light they look light and cloudy, which is a good thing for a wheat beer. There was a layer of pellicle floating on top of the beer before I bottled it, pellicle is ofter associated with an infection. 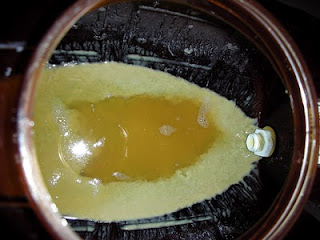 Inside Of Mr. Beer Keg After Bottling Wiessbier
You see the reason I mention this is that 1). I've never brewed a wheat beer using Muntons Wheat DME before and 2). I've never seen such a pronounced layer of pellicle floating on top of the beer just before bottling and 3). I've never seen a wheat beer with such bright yellow color and subtle hint of lemon flavor before. Although it looked like the residual carbonation was lower than the stout I brewed during the same time and it was cloudy which is good in a wheat beer. 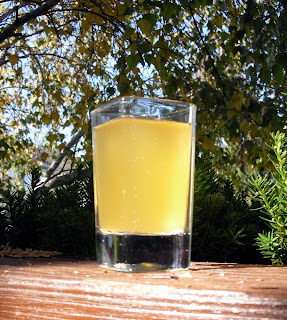 Weizen/Weissbier Sample At Bottling
The pellicle covers the top of the green beer while it's inside the fermenter and prevents oxygen from reaching the yeast. Pellicle is formed by yeast that is normally not used to ferment our beer, this yeast type competes with the good yeast and can our beer to sour, or worse become undrinkable. I've done a bit of research and some information that's out there says it can introduce a sour taste that is desired in beer styles like a Lambic. 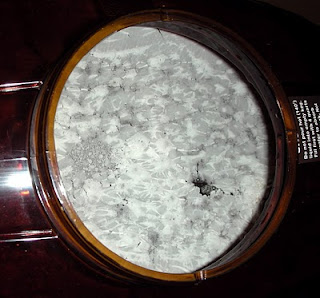 Pellicle Floating On Top Of Weizen/Weissbier
My confusion is that the pellicle was extremely thin and feathery, practically melting away to nothing as the keg was emptied. Information that I researched was hard to find but mostly talked about string like growths or chunks found floating on top of the fermenting beer. These almost always led to really bad tasting sour beer that sometimes improved with ageor sometime just ended up tasting like vinegar.
Posted by Vince Feminella at 9:29 PM