Screwy's Do It Yourself Stir Plate

I've been thinking about how important yeast is to my brewing process and how much I've spent on buying yeast over the past year or so. Yeast can account for as much as 25-30% of the total cost of ingredients that go into a beer recipe and after brewing 45 batches of beer that adds up to a lot of money. I've been reading more and more lately about brewers who have published interesting ways of reducing the amount of money they spend on buying yeast for their recipes.


Watch Stirplate In Action
One of the ways to stretch my liquid yeast dollars is to create a 'starter' to ensure that the yeast I plan to use is viable and to increase the number of yeast cells before pitching them into my wort. Some brewers buy a liquid yeast strain for a recipe and use 25% of it to make a starter, then save the additional yeast grown from the starter in jars for use in their next recipes.

One of the things I find my self doing when all my fermenters are full of fermenting beer is building some clever new beer device to use and eventually work it into my brewing process. This month I found myself thinking about stirplates, either buying one or building one from scratch. I came home from Radio Shack with a plastic project box, 4 small rare earth magnets and a 12 volt dc cooling fan and set out building my very own DIY stirplate. 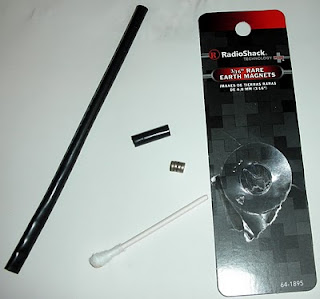 Stirbar Components Plastic Shrink Wrap And Rare Earth Magnets
To make my own waterproof stirbar I first cut a 1 inch long piece of plastic heat shrink tubing and stuffed 4 small rare earth magnets inside until they were in the center of the tube. I then used a hot glue gun to seal both ends of the heat shrink tubing with glue, this will keep the magnets from moving or rusting while helping the stirbar to spin smoothly. 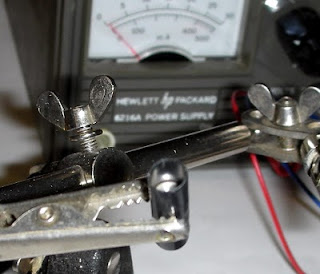 Heat Shrink Tubing With Magnets Inside

The tubing is pretty small so it doesn't require much glue to seal up the ends once the magnets are centered inside the tubing. 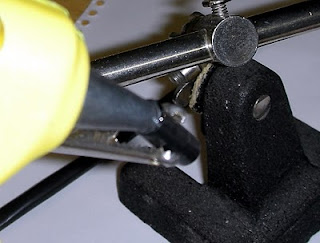 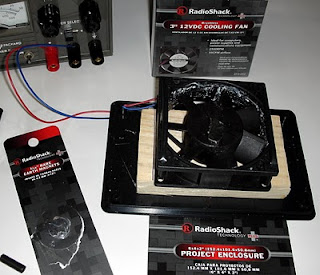 3/4 Inch Wood Spacer Positions Magnets To Top Of Box
* Note: The white splatter on the inside of the fan housing was caused by turning the fan on when the superglue used to fasten the magnets to the fan was still wet.

The large rare earth magnets I salvaged out of an old 40GB. hard drive I had lying around my workshop. These magnets are very powerful and they required a bit of persuasion to get them out of the case where they were located. 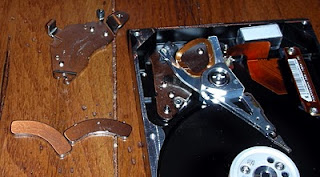 Two Arc Shaped Rare Earth Magnets Taken From Drive Head
The type of hard drive I had used arc shaped magnets which were positioned underneath the drive head, the movable pointer shown in the upper left hand corner of the hard drive pictured above. After removing them from the hard drive I used super glue to secure them to one side of the 12 volt dc fan.

I used the variable voltage power supply I have in my workshop to power the fan and adjust it's speed. The stirbar began spinning slowly when about 6 vdc was applied directly to the fan. I slowly increased the voltage to 12 vdc and the stirbar began spinning faster. You can hook up a 6, 9 or 12 volt dc power converter to power the fan directly if you have either of them lying around the house, or you can buy a variable voltage DC power converter.

The glass vessel I used for the demo video was simply a 1 quart flower vase that I had on hand but the stirplate will also work with a standard Erlenmeyer Flask and an optional Teflon coated stirbar available at brewing supply houses such as William's Brewing.

Posted by Vince Feminella at 6:05 AM