The Stout I brewed back in September was the first stout recipe I had ever made using DME and steeping grains and it included 6 different types of steeping grains added to a dark DME base. The yeast I picked for that brew was Safale S-04 dry ale yeast and after sampling before bottling it tasted good and now that all the bottles are gone I really miss it. But although I was already satisfied with the way this stout had turned out I still wanted to try some changes. 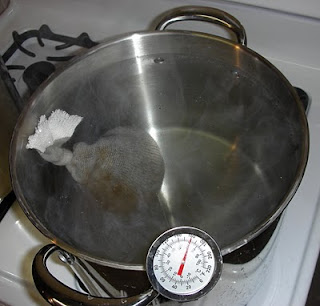 Heating 10.5 Quarts Of Filtered Water For The Steep
After reading many posts I found on the Internet about brewers who really enjoyed brewing and drinking Stouts. One post in particular stood out because the brewer seemed to understand what went into the makings of a great tasting stout. An excerpt from Designing Great Beers, the majority of commercial stouts and porters don't mix black patent, roasted barley, and chocolate. It's a "one or the other" thing. The "standard" formulation is one dark grain + crystal malt. Porters are more likely to use chocolate and black malt, but most dry stouts usually use roasted. A lot of good stouts are made with just roasted barley and pale malt. 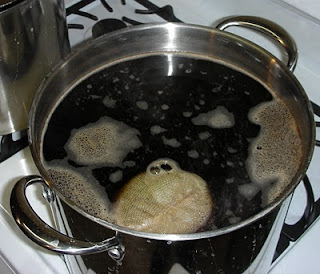 60 Minute Bittering Hop Boil
The recipe I'm about to describe is a bit different than this first recipe in that it uses only 3 different types of grains added to a light DME base this time. Both recipes use Kent Golden UK hops but the new recipes doubles the boil time to a total of 60 minutes and it calls for Danstar Windsor British Ale yeast in place of Safale S-04 Dry Ale Yeast. 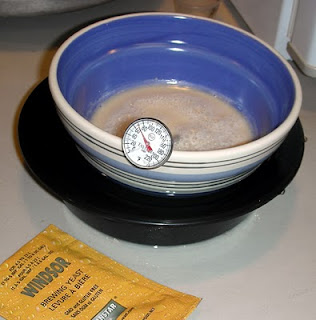 Rehydrating Windsor Dry Yeast Makes A Huge Difference
The package of Danstar Windsor Dry Ale yeast I pitched was very fresh and by the looks of how furious the fermentation took off after only 6 or so hours, I probably could have pitched half the packet. By the next morning the fermenter was bubbling away and spilling krausen out of the vents. This was the first time I've used Windsor yeast and from what I've seen of it so far it doesn't deserve the bad press it's been getting on some of the brewing forums. 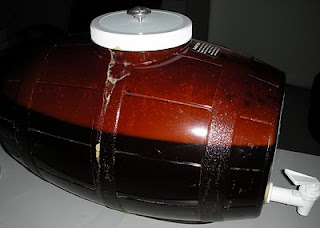 Furious Fermentation Lasted Nearly 3 Days
I used qBrew's default 'Dry Stout' style guidelines to crunch the recipe's numbers. You can download the latest qBrew database below and use it to upgrade your current ingredient database. This latest ingredient database includes more yeast, fruits, extracts and other helpful entries then ever before.

After fermenting in the primary for 14 days I racked the Chocolate Stout to a clean secondary where I'll let the fermentation complete for another 7 days before kegging it.

The primary fermenter was loaded with trub and hop debris which I want to keep out of my finished beer. After moving the stout to the secondary fermenter the beer was clear and free of trub and debris. The next step will be moving the secondary from it's 65F fermenting temperature in 7 days to the fridge which is set to 34F for the cold crash just before kegging it.


After racking to the secondary I cleaned out the fermenter used for the primary fermentation before the trub and debris dried out and stuck to the insides. A hard stream of warm running water and a wash rag were enough to remove all the gunk from inside the fermenter. 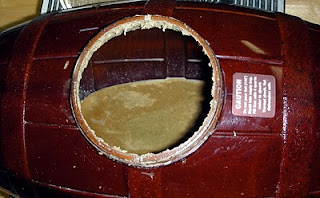 Once the keg looked clean I filled it part way with a solution of One-Step and gave it a few really good shakes and then let it soak for about 15 minutes. After draining out the One-Step I screwed the lid back on the fermenter and stored it away. The next time I go to use it the cleanup and sanitization will be a lot easier, I never put away my fermenters without thoroughly cleaning them first.

Posted by Vince Feminella at 9:31 PM