As promised I brewed two more 2.13 gallon Mr. Beer sized batches of my Weizen/Weissbier recipe today. I used the same exact ingredients that I had used back in September when I brewed this recipe for the first time. At that time the recipe was published as Recipe #36 - Weizen/Weissbier and the pellicle it caused to form as it fermented cleared up a lot of the mysteries surrounding infections and great tasting beer.

Screwy's Weizen/Weissbier Unbelievable Lemon Flavor
I chose to brew these two new batches using the exact same ingredients and brewing processes that I had used for the very first batch I made. In 21 days I'll know if the beer from today's 2 batches tastes the same as that first batch or not. Duplicating this recipe at will is really my goal for today's brewing session. If all goes according to plan I'll soon be drinking my fill of the most awesome wheat beer I've ever had, proving to myself that I can duplicate that amazing wheat beer whenever I want. 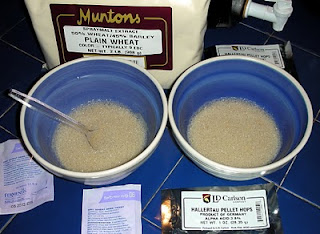 I set aside some time before pitching my yeast to rehydrate the 11.5 grams of Safbrew WB-06 yeast that I selected for this recipe. It was pretty easy to do I just sanitized two bowls, poured 4 ounces of 80F wort into each of them and then sprinkled on the WB-06 yeast. After 15 minutes I stirred the yeast and wort mixture and then stirred them occasionally over the next 30 minutes before pitching them. The yeast cream that developed from this mixture had a nice layer of foam floating on top and at this point I knew it was ready to pitch. 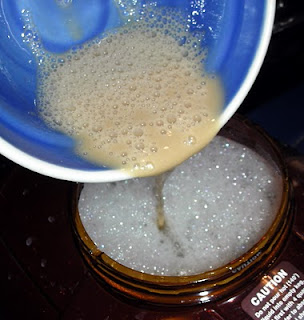 Optical Illusion: The Wort Is Really Level With The 8.5 Quart Mark
I boiled the Hallertauer hops for bitterness and flavor without adding any DME to the boil first, I actually followed Muntons directions on this. They say their DME and LME never need boiling since it's already pasteurized during their spray drying process and it would ruin some of the delicate malt flavor.I boiled the hops alone then added in the honey and with 5 minutes remaining on the boil I poured in the DME and boiled it for another 5 minutes. 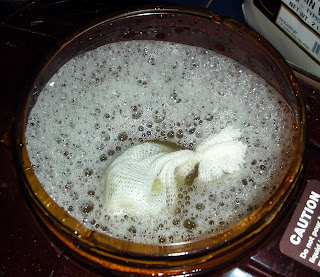 Hallertauer Hops Before Sinking Into Wort
Once I had aerated the wort enough I pitched the yeast and aerated the wort again. When I felt the wort and yeast were aerated enough I tossed in the finishing hops, they were put inside a sanitized hops sack earlier. Once the pellets absorbed enough wort they became heavy enough to sink the hop sack down to the bottom of the fermenter. 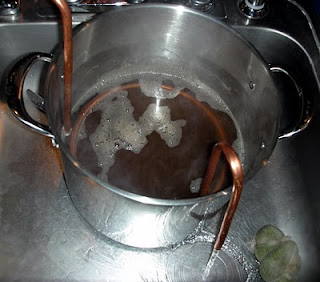 Screwy's Cooler Lowers Wort Temperature To 65F
I was able to use my new 12 quart brew pot today for the first time and it looks like it turned out to be a worthwhile investment. Screwy's Cooler fit this larger pot perfectly and I used to cool my wort down from 212F to 65F in less than 20 minutes. I can't even begin to tell you how much more convenient using a wort cooler is over using an ice bath. I brewed 2 batches of beer one weekend and I used an ice bath to cool the wort down to pitching temperature for them both, I went out and built Screwy's Cooler the very next day. 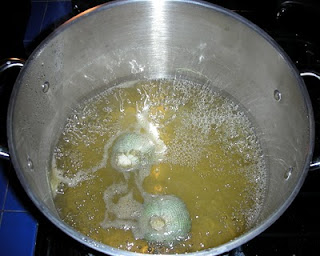 Boiling Hallertauer Pellet Hops In Hop Sacks
The larger brew pot allowed me to use 5 quarts of filtered water instead of the 3 quarts I had to use with the old 6 quart pot. So instead of adding 4 quarts of filtered water to the Mr. Beer keg I only added 2 quarts, since the new pot was going to hold more wort I had to subtract 2 quarts  from the keg so it all would fit. When I poured in the DME the wort stopped boiling for a minute or so as I stirred it into the wort, when it began boiling again I timed it for 5 minutes and then turned of the heat. 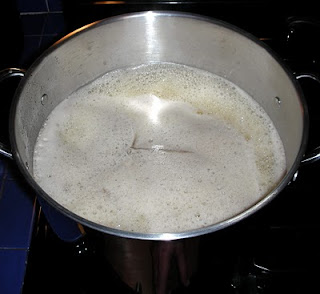 Hallertauer Hops And Wheat DME At Hotbreak
Both batches are fermenting nicely at 60F in the basement now, I'll check them at least once a day to make sure the temperature stays pretty constant. The kegs are sitting inside coolers alongside 2 frozen water bottles which keep the temperatures low enough for fermentation. 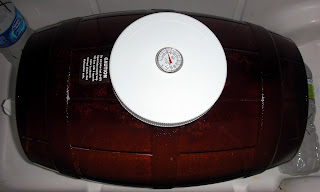 This Weissbier Will Ferment For 21 Days Before Bottling 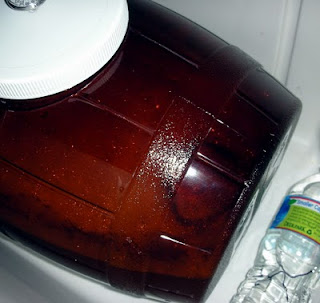 Fermentation Day 6 With Floating Hop Sack
Six full days of fermentation and there is still quite a lot of activity going on, which is a good thing. There's nothing like the sweet smell of fermenting wheat beer every time I open the coolers to check the internal temperature and to peek in and see first hand how the fermentation is progressing.
Posted by Vince Feminella at 4:21 PM