I remember reading once or twice where the ambient air temperature in a room can actually be several degrees different than the beer fermenting inside a Mr. Beer keg. Some brewers liked or didn't like relying on those self stick bar type thermometers, since the thermometers were stuck to the outside the keg and the displays weren't always easy to read.
So the next time I went out shopping at my local food store and while I could still think of it, I bought 6 of those instant read probe type thermometers shown below. For a total spend of just over $20.00 I took home a thermometer that was not only accurate and instant reading it was also made out of stainless steel and the probe length was just the perfect length to fit inside a Mr. Beer keg.

Taylor Instant Read Probe Thermometer
The dials are clearly marked and very easy to read and they're also waterproof. The next thing to do after unwrapping the thermometers was to find out a drill bit that was about 1/32 inch smaller than the diameter of the probe. After drilling one small hole in the center of the Mr. Beer keg's top, and then forcefully pushing the temperature probe through the fermenter top until the back of the dial was less than 1/2 inch from the tops surface, my installation work was done. 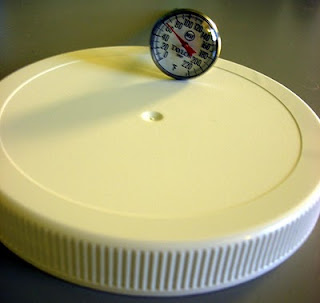 For this part you'll need to have a small variable speed drill and a drill bit that is 1/32 inch smaller than the diameter of the probe. You want to have a nice tight fit so the thermometer doesn't move around but more importantly so no foreign matter like moisture, dust, etc. can get inside the keg and spoil your beer. 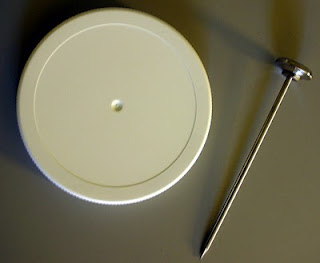 Mr. Beer Keg Top And Thermometer
Before I did anything with the new thermometers I spent a week monitoring them under different temperatures in order to make sure all six were reasonably within the same temperature readouts. I did this by placing them in nearly boiling water, in nearly freezing water and in room temperature water then noting which if any of them were more than 1-2 degrees out of range as compared with the other thermometers. 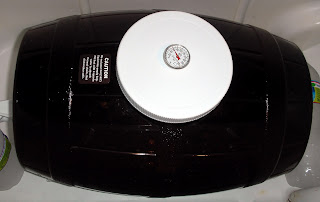 Mr. Beer Keg With Instant Read Thermometer
I found out for myself that it was true, the beer fermenting inside the kegs was actually 2-3F degrees warmer than the room's ambient temperature. I had always read that this was the case but now I was able to confirm it for myself. So during the warmer months I resorted to using the wick method for cooling the kegs down in order to maintain the optimal temperature for the yeast I had pitched. 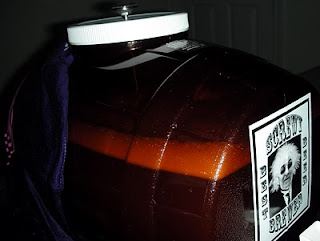 Krausen Floating On Top Of Mr. Beer Keg
I think the relatively little amount of work that's required to install the thermometer is well worth it. I like having the tools in place that are needed for maintaining good temperature control.

Posted by Vince Feminella at 9:30 PM