My LHBS didn't have my first choice of yeast in stock so at the last minute I had to switch from using Wyeast 2124 to using Wyeast 2007 lager yeast.  The liquid yeast package was rated at 5 gallons so according to the OG of this recipe I knew it would be sufficient for my 2.13 gallon batch. I was using my new fermentation chamber for the very first time so I didn't know what to expect. The other 3 fermenters in the chamber had already shown some visible krausen after only 3-5 days but they were all using different lager yeasts types. 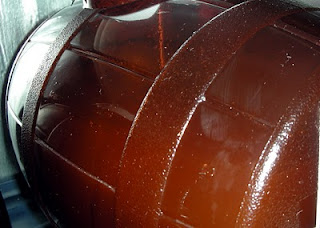 Day 8: No Visible Krausen Floating On Top
The two fermenters located in the lower half of the fermentation chamber had developed their krausen the fastest so after only 3-4 days I could see it already forming on the tops of both fermenters. I wasn't sure if it had something to do with the fact that they were further away from the 'frozen water bottle rack' and didn't have the really ice cold air falling directly on them. 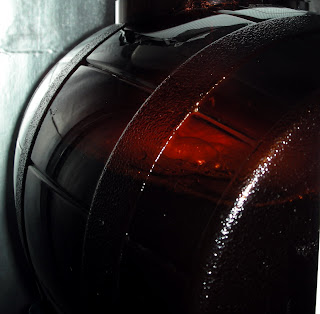 Day 9: Some Visible Krausen Floating On Top
The two fermenters located at the top of the fermentation chamber were the closest to the frozen water bottles and they had the ice cold air falling directly down on them. This may have possibly explained why they took a few days longer to show any krausen on top of the beer. 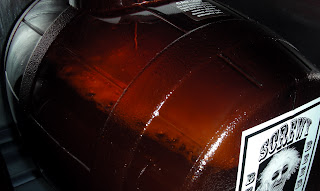 Day 10: Even More Visible Krausen Floating On Top
By day 10 the two fermenters located on the top half were actively showing krausen while the two fermenters on the bottom now seemed to have slowed down on the levels of krausen. I guess if my plan was to prove whether or not the locations of the fermenters inside the chamber made a difference in the visible display of krausen during fermentation I should have used the same yeast type. 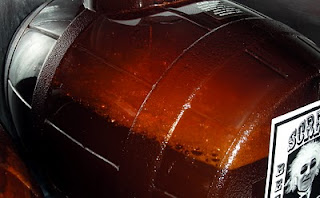 Day 11: Still More Visible Krausen Floating On Top
By now the 3 other yeasts have really slowed up on the amount of visible krausen that can be seen on the top of their fermentors.

After 28 days of fermentation at 50F I bottled all 4 batches and used my Bottle Priming Calculator to figure out how much priming sugar to use for each style.

Posted by Vince Feminella at 5:31 PM