The last Barley Stout I brewed back in November was made using DME and steeping grains. In this version of my Chocolate Barley Stout recipe I use Carapils, Crystal 10L, Chocolate and Roasted Barley Malt steeping grains added to a Golden Light DME base. The yeast I picked for this latest brew is Danstar Windsor Dry Ale Yeast and after only 4 or 5 hours both fermenters have very active fermentations going on already.

I know that Carapils and Crystal 10L will both add sweetness to this stout which is then offset by the Kent Golding 60 minute hop boil. I brewed a Chocolate Stout which used only Chocolate malt and it gave a nice full mouthfeel while desperately lacking the smoky goodness of Roasted Barley. This recipe uses all the aforementioned grains and smelled unbelievably awesome while brewing.

I used qBrew's default 'Sweet Stout' style guidelines to crunch the recipe's numbers. You can download the latest qBrew database below and use it to upgrade your current ingredient database. This latest ingredient database includes more yeast, fruits, extracts and other helpful entries then ever before.

I rehydrated the Windsor yeast in boiled water cooled between 86 and 92 degrees and stirred the mixture occasionally. By the time my wort was chilled to 70F the yeast mixture was the same temperature as the wort and ready to pitch.

The yeast has only been pitched about 7 hours and the fermentation is furious already. I place the lids of plastic storage bins directly under each Mr. Beer fermenter just in case they kegs decide to overflow they won't ruin the carpeting. I had the same fermentation spillover happen last December when I brewed the Barley Stout recipe for the first time so I had a strong feeling it might happen again this time.


I woke up this morning to a potentially huge mess, luckily the fermenters were on top of drip trays and the spill was contained. I sopped up most of the beer with a washcloth and then got the rest with napkins and paper towels. One of the fermenters is still spitting Co2 and beer but the other one has seemed to calm down now, I must have pitched that one before the other.
Yesterday I racked the Stouts to clean secondary fermenters where they'll sit for another few weeks at least before bottling them. The insides of the primaries were pretty gunked up with stuff produced during the primary fermentation so I figured it won't hurt to get the beer out of there. 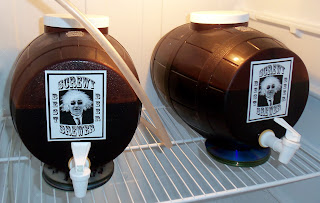 After 2 weeks in the secondaries I moved the fermenters to the refrigerator to cold crash for 5 days. The idea is to let the cold temperature help drop out any suspended yeast or trub still remaining in the beer to the bottom of the Mr. Beer kegs before bottling and kegging it up. This step is important because it reduces the amount of gunk that eventually would end up in your glass.

My final gravity hydrometer reading at room temperature showed the beer fermented out to 1.017 or about a point lower than qBrew had estimated. The beer sample I drank was clear and dark and had that nice roasted Barley taste that came through nicely even without the carbonation being present. I plan on kegging one batch and bottling the other in 12 ounce bottles today and adding 1 tablespoon of pure vanilla extract per gallon of stout to enhance the chocolate flavors. 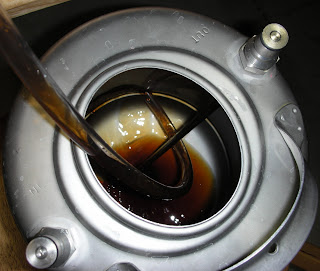 I kegged 2.5 gallons of the Chocolate Barley Stout directly to a corny keg adding 2.5 tablespoons of pure vanilla extract to the keg before filling it. I purged the keg with some Co2 before transferring the Stout to it by connecting the gas ball lock to the beer out side of the keg. I filled the keg up to the dark line on the inside of the keg, locked on the lid and hooked the gas up to the gas in and purged it a few times. I'll let it sit with 15 psi for 5 days before 'sampling' it. 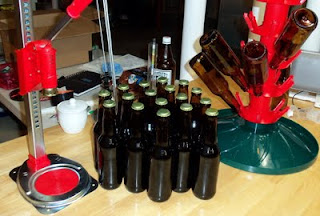 I had enough Stout left over to fill 17 long necks after topping off my corny keg. I primed them with a shade more than .5 teaspoon of pure cane sugar and I'll let these carbonate for 3 weeks and condition for another 3 weeks before I start drinking them. I didn't add any vanilla extract the the bottles but at almost 7% alcohol they should be very tasty. 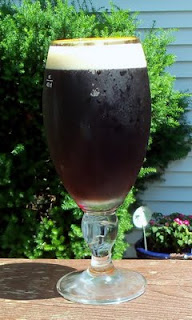 This Chocolate Barley Stout was brewed on April 23 and kegged on May 14th and it was gone by May 29th. I still have about 8 twelve ounce bottles left and I'll drink them too soon enough. The addition of 1 tablespoon of pure vanilla extract per gallon of stout worked well in bringing out the chocolate flavor in this beer.

The next time I brew this recipe I will add another 1/2 pound of Roasted Barley malt to the recipe to increase the roasty flavors that balance out the chocolate flavors. The Kent Goldings hops worked well in the background for adding enough bitterness so the beer was not overly sweet. For my tastes every Stout should have a strong Roasted Barley backbone and any adjuncts added should work with and not overpower that.
Posted by Vince Feminella at 10:52 PM